Our Church “St. Spiridon of the Stadium” is dedicated to St. Spiridon the Miracle-worker. St. Spiridon lived towards the end of the third and at the beginning of the 4th Century A.D. He died in the year 348 A.D. He was bishop of Trimithous in Cyprus and participated in the First Ecumenical Council held in Nicea in the year 325 A.D. His relics are preserved in tact at a Church dedicated in his name on the island of Kerkyra (Corfu).

The cornerstone of the present Church was laid in 1903. It stands on a spot where there used to be a small Church dedicated to the Saint as well as to St. Anthony. The Church’s archives inform us  that the original architectural plans were drawn up by the famous architect Tsilller. These, however, were later revised and modified several times before construction was completed. This was due chiefly to the fact that the current Church was built during the period between the two World Wars, a time of financial distress. During the Greek Civil War the building suffered damages. Its last renovation took place between the years 1985 and 1990 and included the repair of both the exterior and interior of the Church, the laying of a new marble floor and the completion of the Church’s murals. The Parish Hall and other adjacent rooms were built in 1961.

The Church is built in Byzantine style with a dome, and covers an area of 466 sq. meters about. The distance from the floor to the top of the Dome is 25 meters. The Church’s murals were begun in the 1950’s by the iconographer Constantinos Kotsis, and were completed in the 1990’s by the iconographers Panagiotis and Alexandros Batas (father and son, respectively).

The inhabitants of our Parish number some 20,00, 10% of which are foreigners of various nationalities.

Three Priests and two canters serve the Parish. It has a large polyphonic choir, a five-member Parish Board and a seven member Ladies’ Philanthropic Council. A sextant looks after the Church’s upkeep and two Catechists instruct the Parish’s children in the Orthodox faith.

The Church is governed by a five-member Parish Council or Board, presided over by one of the Priests. The remaining four members are laymen.

The Parish’s philanthropic and charitable work is coordinated by a Governing Council of Ladies over which one of the parish priests presides.

The youth ministry has its Governing Council as well, composed of two lay members and a Priest as its chairman.

Besides the Divine Liturgy and the other Church Service and the Sunday and Week day Sermons, the Parish has a rich programme of other activities:

Our Parish, situated as it is, in the centre of Athens, faces all those difficulties common to parishes functioning in large urban centres: the problems produced by heavy traffic, (lack of parking, much time expended in reaching the Church, etc.), the isolation from one another of the city’s inhabitants as well as other daily problems of sustaining oneself and one’s family. Our Parish strives to assist its parishoners in facing these problems while preserving its historical and spiritual importance, its vitality and its beauty and, above all, providing its Orthodox Witness to the contemporary world with much love for our fellow human beings and with deep faith in God.

We pray that the Grace and Blessings of our Lord Jesus Christ be with you always and that St. Spiridon will ever protect and sustain you. 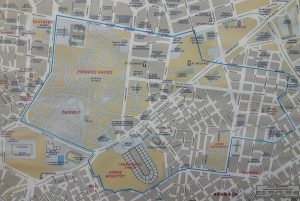